(CNN)One crisis in which the welfare of a major city’s children were sacrificed in the budget-tightening process would be enough to concern any state.

That’s the case in Michigan, which is dealing with “sick-outs” staged by teachers fed up with the abominable conditions of public schools in the state’s largest city, Detroit, while also grappling with the widespread lead poisoning of children and other residents in its seventh-largest city, Flint.

Sweltering and chilly classrooms, black mold, pieces of ceiling falling on students’ heads and pests such as rats and roaches running the halls are just a few of the problems cited by the main teacher’s union in the city of almost 700,000. (Teacher strikes are illegal in Michigan, and the union says it is not affiliated with the sick-outs.

At Thirkell Elementary-Middle School, eighth-graders are housed in the gym and pulled into classrooms for core subjects for an hour or so a day because of the shortage of teachers.

“The community is crying out for help over what is clearly a crisis in our schools,” Detroit Federation of Teachers Interim President Ivy Bailey said.

Sixty-four — or roughly two-thirds — of the city’s public schools were closed Monday, leaving thousands of students out of the classroom as a result of the sick-outs. 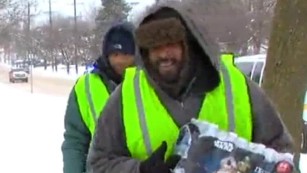 State schools Superintendent Brian Whiston had asked the teachers to reconsider their stance — saying he understood their concerns “but for the sakes of their students, they need to be in the classrooms teaching.” That didn’t fly with the teachers.

“We shouldn’t have classrooms busting out at the seams. We have 45 and 50 students in classes,” DFT administrator Ann Mitchell said. “We have classes where there is no coverage for the students, there are no teachers there because we have a teacher shortage. These issues have to now be addressed.”

The demands to address a city crisis echo calls emanating from 70 miles northwest of Motown: There, in Flint, a city of almost 100,000, residents are bracing for widespread problems among the city’s youth when the long-term effects of lead-laden tap water come to fruition.

But that’s yet to come. Right now, the mayor and Gov. Rick Snyder have declared states of emergency, and Snyder has called in the National Guard to help deliver clean water to residents.

How to help Flint

Flint’s woes began almost two years ago when the Flint River, a notoriously filthy tributary, replaced Lake Huron as the city’s water supply. It was billed as a temporary cost-saving measure until a new supply line to Lake Huron was ready.

“We thought it was a joke,” said Rhonda Kelso, a longtime Flint resident. “People my age and older thought, ‘They’re not going to do that.'”

Shortly after the switch, the water began looking, smelling and tasting funny, dirty even. It turned out the river water was highly corrosive — 19 times more corrosive than the water in Lake Huron, Virginia Tech researchers discovered. 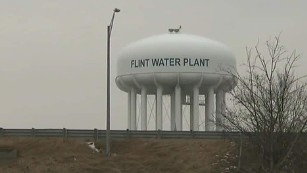 Two more factors compounded the problems, according to a class-action lawsuit: The state Department of Environmental Quality wasn’t treating the water with anti-corrosive agents as required by state law, so the water was eroding iron water mains, turning them brown, and about half of the service lines to Flint’s homes are lead, and the toxic element began leaching into the water supply, along with the iron.

Problems yet to manifest?

Lead poisoning is dangerous for anyone, but in declaring an emergency in her city, Mayor Karen Weaver pointed to ample research showing how lead exposure can affect a developing child’s IQ, resulting in learning disabilities. Weaver worries that Flint will need an influx of funding in the future to deal with mental health issues and “an increase in the juvenile justice system.”

There could be greater demand for adoptive and foster parents “as a result of social services needed due to the detrimental effects of the high blood lead levels.”

This would be in addition to the litany of health woes facing all Flint residents, according to the lawsuit: skin lesions, hair loss, vision loss, memory loss, depression and anxiety.

If you think Flint’s and Detroit’s problems sound more like city issues than state ones, you’d be wrong.

In Detroit, a state-funded and -appointed emergency manager assumed authority over the Detroit Public Schools in 2009. This year, according to Duggan, the manager used at least 30% of the school system’s state funding to pay off city debt rather than fund schools. 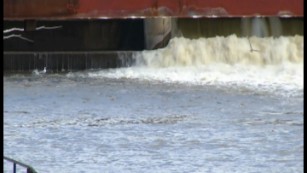 The emergency manager, Darnell Earley, has said the financial problems with city schools are well-documented and the system’s “capital and maintenance programs have been lacking in some areas.”

Flint experienced a similar state takeover. In 2011, amid a financial state of emergency, the state took over the city’s budget, leaving all decisions about the water supply with the state, not the city council or mayor.

“When the governor appointed an emergency financial manager, that person came here … to simply do one thing and one thing only, and that’s cut the budget, at any cost,” U.S. Rep. Dan Kildee, D-Michigan, has said.

(Incidentally, Earley was serving as emergency manager in Flint when the city switched its water source in April 2014, but in an October statement submitted to CNN affiliate WJRT in Flint, Earley said he was not responsible for the decision, only with implementing it after it was approved. Flint’s mayor and — in a 7-1 vote — the City Council approved the decision to pump water out of the Flint River, a decision OK’d by then-emergency manager Edward Kurtz in March 2013. That was seven months before Earley became manager, he said in his statement.)

Many blue-collar Michigan towns have seen precipitous declines in the past 30 years. Flint, in particular, was kept afloat for decades by jobs at General Motors plants, but when those plants began closing their doors in the 1980s and 1990s, a drought of jobs and investment followed, and its population began to decline.

Both cities have seen their once-bustling industrial sectors replaced with crime and urban decay. Median household incomes in Flint and Detroit — $24,834 and $26,325, respectively — are less than half the national average.